Marie Kyriakou was born and raised in Athens, Greece. She graduated from the Drama School of the Athens' Conservatory and has since then enjoyed a successful career as an actress in cinema, theatre, and television. Marie is involved with children's charities and has launched several projects over the years to offer aid to those in need. She created and hosts the daily television program With Love, which airs on Antenna TV. Through this show, she connects charitable organizations with individuals facing serious problems, allowing them to get the help they need in a timely manner. She has created Boxes with Love in order to collect lightly used clothing and other donations that are distributed to children and adults facing difficult economic circumstances in Greece and abroad. She has also established Line with Love, a telephone line open to anyone who wishes to make monetary donations to charity. Marie has been awarded with several medals and honors for her humanitarian contributions. Among her many accolades are the 2008 Golden European Medal for volunteering by the European Parliament in Strasburg and the 2011 Gold Medal for humanitarianism by the International Austrian Humanitarian Association, Albert Schweitzer in Wien. She was honored with the Communication's Award of the Volunteering Values by the Ministry of Health and Social Solidarity. The European Council of Young People also credited her as an idol for young people, thanks to her social contributions and volunteer initiatives. Marie Kyriakou is constantly inspired by children. Mike the Little Bean is an extension of her love and dedication toward bringing happiness and smiles to every child. 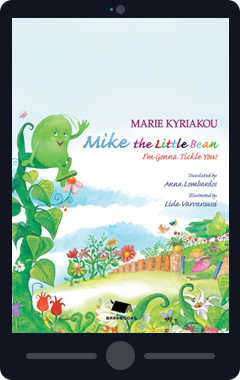 Mike The Little Bean: I 'm gonna tickle you!

Mike is a tiny, shiny, and very green little bean. He and his family live in a big field surrounded by many friends—the bright colorful trees, the countless birds, and the beautifu 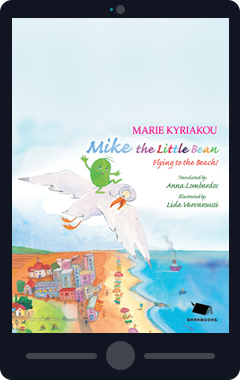 Mike The Little Bean: Flying to the Beach!

Mike is a tiny, shiny, and very green little bean. He and his family live in a big field surrounded by many friends-the bright colorful trees, the countless birds, and the beautifu

Our ebook files are in epub format with Adobe DRM encryption in order to protect our authors.