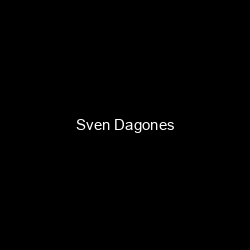 Sven Dagones was born in Aschaffenburg, Germany to a German mother and a Greek/American father. He grew up there, played and traveled with various bands as a drummer, got his “Abitur” college degree and drove his first car to Paris where he lived for two years in Montparnasse, working as a doorman at Maxim’s restaurant (red uniform and cap) and as an apprentice to a made-to-measure tailor. He moved via Nice to Milan, where he studied Italian, working as a tailor for a Sicilian before moving to Athens, where he spent the better part of a year painting and enjoying the nightlife. He then moved to Los Angeles, more or less on a whim. There, he lived above a garage on Melrose Avenue, working at various retail stores, before his constant writing enabled him to get by on his earnings as a screenwriter. But things more or less carried on that way, Greece, back to L.A., to the South of France for three years, not to mention a discarded novel, written under the winter rain at an unheated cottage in Normandy, working for a TV producer in Buenos Aires, as an assistant director in Maryland, and other incongruous far-flung stints. Finally he wound up back in Greece, where he fixed up his grandparents’ old house on the island of Evia, writing and raising his miracle of a daughter. They just moved to Halandri, Athens, keeping the island home for weekends, for now. Due to his immersion into all manner of jobs (gardener, builder, drum teacher, translator or CEO of a chain of kitchenware stores, in addition to the above) and his sojourns in many countries, he knows a bit of everything, speaks five languages and has a sack full of stories to tell. … I guess the idea is that a good writer needs to live as much as he writes, otherwise the writing goes stale. In Sven’s case, there’s no danger of that.

Our ebook files are in epub format with Adobe DRM encryption in order to protect our authors.